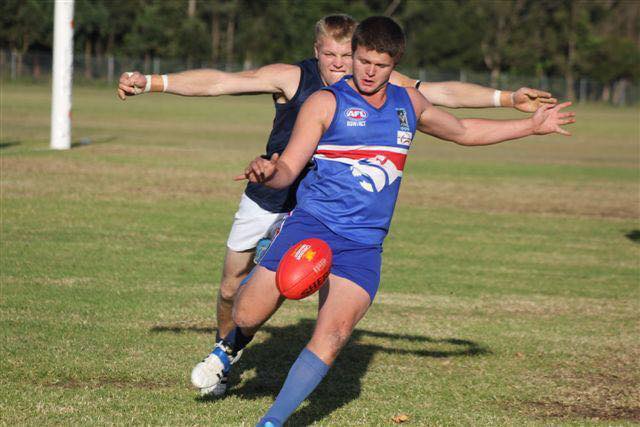 Jake Roach 150th in the Red, White and Blue

This weekend will mark a significant milestone for the Warners Bay Australian Football Club when senior player, and former club junior, Jake Roach pulls on the guernsey for the 150th time. This milestone is especially significant given the Roach family’s history with the club. Jake’s grandfather Kevin Roach Senior and father Kevin Roach have both played pivotal roles in the clubs history filling numerous roles across the football club.

Jake began playing with the junior football club in under 10’s when he switched over from Rugby League. Jake quickly picked up the game of Australian Rules football and was a stand out from the start playing up forward, in the centre or in the ruck. Throughout his junior career Jake was heavily involved in representative football for the region including playing in the NSW/ACT Ram’s side, something we are all reminded of as he is that bloke that wears his junior rep gear to senior training, and to just to let any newcomers know as well. Many of his current teammates have progressed through the ranks from juniors to seniors and it will be good for them to share this milestone with him. 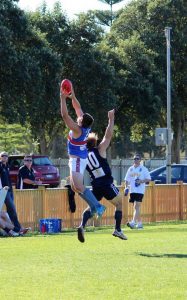 Jake made his first grade debut at the young age of 16 in the 2007 season. From his very first game of senior footy he made an immediate impact with his speed, skills and talent and it was clear he was destined to play a big role in the club’s future. Forever looking to impress the senior players whether with a long run with the footy or a goal from outside 50 there was also a side to him that happened to rear its head from time to time. In his late teens, Jake was always keen to have the odd wrestle, an ‘accidental’ late hit or a love punch in the guts; provided his opponent was smaller than him and the likes of past players Nathan Brennan, Josh Molan and man crush Ben Hunter were close by in case things got out of hand. 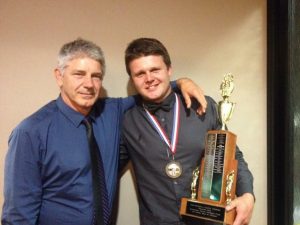 In his early to mid-20s Jake began to really come of age on the field and become a pivotal player for Warners Bay in the midfield, particularly through some tough seasons for the club. It was this loyalty and commitment to the club that has been a standout feature for Jake which is safe to say is a hallmark of the Roach family’s commitment to the football club over many years. Jake has been a tough contested player who rarely gets beaten one on one and loves finding the hard ball, laying a big tackle and taking a strong contested mark. He has also been a versatile player who can go down forward and kick goals or head down back when needed. Jake has also captained the senior side in 2017 and 2018, is a dual Russell Macey Medallist for the best player in first grade, played for the Sydney Swans reserves in 2010 and has made a few notable appearances on footy trips in years gone by. Playing senior football with his younger brother and current club captain Luke would also no doubt be a highlight of his career. Other significant stats in his 150 games include 110 down field free kicks given away, roughly 100 x 50m penalties and 5 speckies have been taken on his head. Roachy is also a deep thinker and has unique insights on the game which was shared in a Black Diamond article in 2017 when he stated “It might sound surprising, but when I train more I can kick longer”. 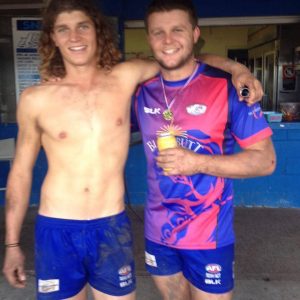 In all seriousness, Jake has been a club stalwart, leader and a footballer who can win the game off his own boot. He has been an even better bloke and a loyal friend to his many teammates in the club across his journey. He has played with passion and represented the club well and we wish him all the best for game 150 and look forward to seeing him run out for his beloved bulldogs this weekend. We encourage all supporters and members of the football club to come down to Gosford to celebrate the occasion and cheer Jake and the boys on for a win in this milestone game.