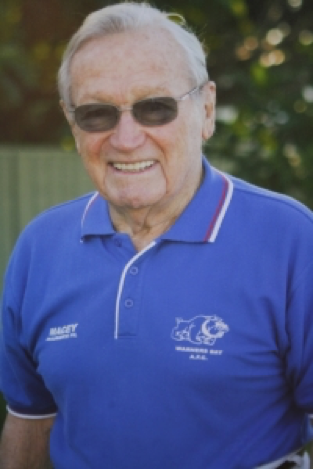 Bulldogs' founder had a profound impact...

Most of us would consider ourselves to be passionate about footy; some might happily claim ‘fanatical’ or even ‘tragic’ status. But how do you classify a person who devotes 37 years to the club he founded, 22 of those as President, property steward, recruiting officer and canteen manager, and someone also responsible for the establishment of a schoolboy competition that still runs today? And what if all that was achieved after a playing career in a state where Australian Football is not the dominant sport?

It’s difficult to find the right term to recognise the contributions made to Australian Football by John ‘Mac” McKeown, aged 87. But at Warners Bay Football Club, located 15 kilometres south-west of Newcastle on the edge of Lake Macquarie in NSW, his status as a club ‘legend’ is undisputed. The story of McKeown’s life is both intriguing and inspiring. Living through the Great Depression as a child in Western Australia, McKeown was forced to attend more than 20 primary schools as his father travelled around Australia in an attempt to find work. As a young adult, he enlisted in the Royal Australian Air Force and was assigned to ground crew work before graduating to flying duties in 1942. He flew Lancaster bombers over Berlin at the tail end of World War II before moving back to Australia and embarking on a teaching career. (He had played Australian Football in Sydney before enlisting and continued to play on his return).

After various postings in NSW, he moved to the rugby league stronghold of Newcastle in the late 1960’s after accepting the position of mathematics master at Warners Bay High School. With no local Australian Football team in the area and not even the scent of a sherrin in the sports equipment storeroom, McKeown – ever the evangelist – set about the task of converting students to the game. McKeown was largely – if not solely – responsible for the formation of the Lions Cup, a state-wide schoolboy Australian Football competition that Warners Bay High School won in 1976. Through the now-defunct competition, he introduced thousands of schoolboys to Australian Football.

As students’ interest in the game grew beyond school, McKeown formed the Warners Bay Bulldogs Football Club, and entered an Under 17 team in the Newcastle Australian Football League. (The NAFL later became part of the Black Diamond Football League, one of the oldest Australian Football competitions in the country). The Black Diamond League has produced the likes of Essendon’s Mark McVeigh and his brother, Sydney Swan Jarrad, Terry Thripp and Troy Luff, who also played for the Swans, Ray Hall, a former Richmond defender, and Matt Granland, now a football broadcaster for radio station SEN. After winning the flag in 1974 and finishing runner-up the next two seasons, the Bulldogs entered a reserve grade team in 1976 under McKeown’s direction. In 1977, promoted by the NAFL board, McKeown fielded a senior side, with the club winning its maiden senior title in 1984 and playing in 12 first grade grand finals from 1983-96. In that span, the Bulldogs won six premierships, including a record-equalling four in a row from 1990-93.

McKeown, who was known as “Mr Aussie Rules” around the Hunter region for his work promoting the code, was club president in those halcyon years from 1977-98, thereafter acting as a volunteer at training and on match-days. His involvement with the Bulldogs sadly ended recently when he moved to Canberra to support his wife Connie in an aged-care facility. There is little doubt McKeown’s selfless work and commitment to Australian Football laid the foundation for the code’s growing popularity in NSW.

“Mac” recently returned to Newcastle in early 2010 and is still often seen at the ground on gamedays, checking on his beloved Bulldogs and shouting a beer to his clubmates.