BARTV are providing livestreaming of the ceremony and subsequent Black Diamond Cup fixture, with our own Lucas Holmes in commentary.

Cardiff AFC President Quinton Davis suggested that an Anzac Trophy and an Anzac Day Medal for best on ground be presented after the completion of the Black Diamond Cup fixture. The trophy has been named the Cardiff RSL Sub-branch ANZAC Trophy, with the Sub-branch readily accepting our offer to have the perpetual trophy named after them. Nathan Harkness and Marty Reiman, respective Black Diamond Cup coaches, will adjudge the Anzac Day Medallist for the best player on the ground.

To give you an idea of the support we have been give, the Cardiff RSL Sub-branch wrote to us recently:

“Syd Lynch President of Cardiff R.S.L. Sub-Branch will be conducting the Service. Peter Taylor, Vice-President will be attending.

The Bugler will be David (Dave) Walker O.A.M. The drummer will be Ms.Heather Walker (daughter of Dave).

The National Anthem Singer will be Ms.Emma Masters.

There should be quite a number of Sub-Branch members also attending, plus Families.”

We cannot thank the Cardiff RSL Sub-branch, and Cardiff AFC through President Quinton Davis, for their incredible support of our ANZAC Tribute match.

The two clubs have agreed to request, from the League, an Annual ANZAC fixture, and this Saturday represents an historic occasion; two fierce local rivals creating their own slice of history. We welcome everyone in the local community, players, officials, supporters, families to Feighan Park for what should be a very special occasion.

After the Black Diamond Cup match has finished, we invite everyone back to the Cardiff RSL, 45 Macquarie Rd, Cardiff, for the Coaches Awards and a few drinks together. 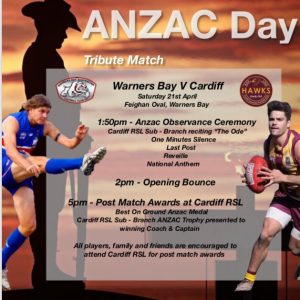