This weekend will see the Warners Bay women take on rivals Newcastle City Stars for a chance at finals football. A key player on the day will be defender Hannah Gow, playing her 50th game for the Bulldogs. Gow is no stranger to taking on Newcastle City, who often keeps them low scoring through her incredible defensive display time and time again.

Hannah, born and bred in Newcastle, has been a keen participant in sport for most of her life. From Nippers for 16 years to touch footy since she was just 7, Gow has played many sports in her time. She played basketball for 5 years before switching to soccer for a further 5.

For most reading this, given her style on the field with strength and the good ol’ hand palm, it is difficult to believe that Hannah only started playing rugby when she was 18. “My parents wouldn’t let me play before then. I played it for 7 years, and really enjoyed it.” Gow states, without mentioning how good she was at it. Although she loved rugby she decided to give AFL a go at the same time. Like the absolute trooper she is, she’d play Aussie Rules of the morning before playing Rugby Union of an afternoon, followed by a quiet few at a respected establishment on Beaumont Street on a Saturday night. When she took on AFL at first, it was a bit of a casual change and just wanted some extra fitness. She soon realised how much she loved AFL and gave up rugby as it was too hard on the body to manage all three Saturday activities. However Han wasn’t able to leave it as that. She then took up competitive Crossfit, which would explain why she is a casual gun each and every weekend. “It’s not a cult, I swear!” states Gow, as she goes on to discuss that although she doesn’t follow and professional sporting teams, she does in fact follow Crossfit as a sport. It is also this writers understanding, that Hannah has even been overseas to compete in Crossfit competitions, showing her strength and determination which shows each week at footy. Hannah’s favourite athletes are Tia-Clair Toomey and Carol-Ann Reason-Thibault. 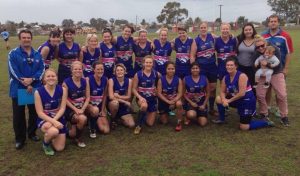 As mentioned, taking on Newcastle City is no stranger to Hannah who was there when the Doggies took a narrow defeat in the semi’s 4 years ago. Her favourite sporting moment this far was when the Warners Bay girls beat City a few weeks ago, being the only team to do so in almost two years. Gow’s most embarrassing sporting moment would be the time at Rugby where she was knocked out on the side line right in front of everyone, which is perhaps why she rocked the head gear for her first few AFL seasons. Hannah has loved playing with the Bulldogs since her first game where we played in the mud. “It was raining and ridiculously muddy. I had no idea what I was doing but had so much fun sliding around in the mud. I love the Doggies, everyone is so nice and the club is really inclusive.”

Just when you thought Han couldn’t be more of a legend, she’s decided to volunteer in a remote community in the Northern Territory with NASCA to help and empower Indigenous young people. You can read about Hannah’s journey on the link below, any donations are much appreciated. https://nascaseptemberntvolunteerprogram.raisely.com/hannahgow

Hannah has been a consistent defender for Warners Bay each week. It has been a pleasure to play alongside Gow for the past 4 seasons, and everybody at Warners Bay wish her all the best for the weekend in celebrating her 50th game in the good ol’ red, white and blue