Lachlan Deverell Brings up a Tonne

Dev was born into an AFL pedigree, with father John Deverell widely recognised as a club immortal and tenacious fullback. Lachlan made the switch to AFL from kick and giggle at the age of 10, after following in John’s footsteps *cough* ‘shadow’ to the Kennel. From here, Lachlan would play in multiple grand finals, and will not hesitate to tell you all about how he kicked 6 goals with a broken arm in his under 17s grand final.

Dev has made a name for himself amongst the club for many reasons. First and foremost, he is the sole member of the men’s Fines Committee, often found dishing out fines left, right and centre for mainly minor discrepancies and ruling in a dictator-like fashion. Kaiser Deverell is also one of the most quick-witted and banterous clubmen, and will never miss a chance to chip his team mates or opposition players.

Off the field, Dev is known to have absolutely zero alcohol tolerance, often becoming tipsy after 2 beers, not to mention his red wine fiascos at the last two presentation nights. Dev also put in a poor performance on last year’s footy trip to Cairns having spent the majority of the trip in the foetal position after the first night. On the field, Dev is often found to be no-where near his man, famously taking the ‘zoning’ setup to the next level and leaving his opponent with his own real estate.

In all seriousness, Dev has made a name for himself as one of the best defenders in the league, rarely beaten in flight or on the ground, and serving as a reliable sweeper and switcher of the footy out of trouble. His highly skilled defensive work saw him named in the BDAFL Team of the Year in 2017, as well as taking out the club’s Best and Fairest award. He also asked me to mention that he played for many representative sides, including Newcastle Rep, Northern Heat and the Sydney Swans Academy.

Dev has cited the club’s funniest man as Tim Hoff, but added “after knocking the froth off a few, Benny Hunter is a one-in-a-generation character”. When asked who is the club’s most annoying player is, Dev stated, “Obviously, Kayne Gibbs. Can I vote twice?” which comes as a surprise to absolutely no one. However, Dev said Warners Bay has no ‘best bloke’, but added “that’s why I love the club”.

In his 100 games of first grade footy, Dev has had many embarrassing moments. He dubbed his most embarrassing moment as when he won the toss against Cardiff this year, and had to wait to see which way Cardiff lined up, as he had forgotten which way he elected to run. He also noted an incident at Nelson Bay, where “I saw Nick Turner getting towelled up so I went to fight his battles like I always do, and ended up getting the sh*t punched out of me and busting open an eyebrow”.

Off the field, Dev named his funniest story as a trademark Kayne Gibbs moment which made us all question Gibbs’ intellect. Streaming the basketball on his phone at the Warners Bay Hotel, Gibbs became frustrated with Deverell brothers Corey and Lachlan repeatedly calling him on his phone, interrupting the livestream. Gibbs stood up in frustration and said “I’ll just go into the next room so you can’t call me”. Nice one Kayne, top shelf logic there. It is also of note that this was one of the once-in-a-blue-moon times where Lachlan was spotted at the pub.

He may be readily labelled a flog by his team mates, have a hairline that recedes more than the tide and live in the shadow of his father, mother, two younger brothers and anyone with the surname ‘Deverell’, but Lachlan is one of the best and most reliable players of our first grade outfit, and is an integral member of our backline. Dev has developed into a brilliant backman in his 100 games and I am sure he has many more years ahead of him. We wish him good luck in his milestone at the Kennel against Terrigal Avoca 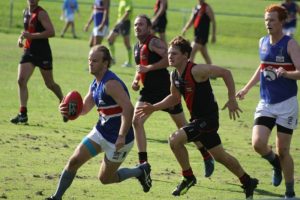