Round 7 will see Warners Bay women’s captain, Elizabeth “Liz Ellis” Brown playing her 50th game for the club. Liz has been consistent both on and off the field since the beginning of the GE Women’s BDAFL competition in 2015.

The world was blessed with Liz’s presence as she entered the world in Sydney many (many) years ago, before moving to Port Stephens when she was 9 years old. Liz completed her schooling at Newcastle before jetting off to spend a year in England, one of her many (many) overseas journeys. Perhaps the buildings in the UK are what sparked her interest in architecture, which she began at the University of Newcastle when she returned home. Liz is good at everything she does. She completed her architecture degree and spends a lot of her time, when not on yachts for “work” purposes, working as an architect and director/part owner of SHAC. As Liz has a solid commitment to being an absolute legend, SHAC is one of the major sponsors for the Bulldogs Indigenous round.

Not only is Liz pretty academic, a self-proclaimed secret (not secret) math nerd and successful architect, she’s actually been pretty active in sport her whole life. Liz has participated in swimming and cricket, but mostly soccer which she still plays now. Liz rocks up to soccer on Sundays sporting bruising and tears from Aussie Rules the day before. Whilst soccer hardly compares to the rough-and-tumble of AFL, it’s pretty impressive that Liz (not doing things in halves) is also captain of her soccer team. In typical modest Liz form, she casually made mention of having “a small dabble in rep teams, but you know, nothing too serious”. 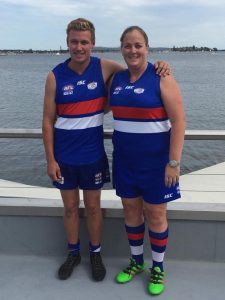 With her background in just nailing everything she tries, it’s no surprise that when her good friend Emma Hamilton convinced her to come along to trial Women’s AFL at Warners Bay, she immediately became the backbone of the team, even without having watched a game of AFL in her life. So what makes a big shot like Liz stick around at the sport and club? “I love AFL for the passion and true club feel that Warners Bay has”, states Brown. This was locked in 2015 with one of Liz’s favourite footy moments when Warners Bay took on Newcastle City in the GE Women’s BDAFL finals, only just short of making the Grand Final. When it comes to club spirit, it’s hard to go past the “Hands in for Jayde” fundraiser which Liz put significant time and effort into.

Liz has been a team player since the moment she joined the Doggies. “I am amazed by the way that women’s AFL has taken off since it began 4 years ago. I’m a little annoyed I’m too old to take full advantage of all the opportunities but I love my Doggies and wouldn’t know what to do on a Saturday without them.”. Although the Captain sometimes shows her love for the girls in slightly unorthodox ways as she is known for some friendly fire, having a head of steel and knocking team mates out whilst sporting a black eye, her efforts are greatly appreciated.

Brown is a leader, a captain, a major sponsor, a player, a social coordinator, an administrator, an all round legend for the club, but her best feature without a doubt is her cat, Franklin. Given her inability to feel hungover (leaving most of the girls envious of a Sunday morning), we will assume that Liz will be having a few to celebrate her 50 games with the club on Saturday.

Not many have put in as much time on and off the field as Liz, so we wish her all the best taking on Gosford this weekend and for the future endeavours in the club. Buy her a cider, she deserves it. Thank you for all that you have done for us Liz! Good luck.

What can you say about a person like Kate Booth? One of the few good things to come out of Canberra? Someone with one of the shortest spoken names in the English language? A fantastic hairdresser but only on her own hair? Or a reliable defensive player for Warners Bay, who week after week puts her heart and soul into representing the Doggies. One of those statements is true – I’ll let you be the judge.

This weekend marks Kates 50th game for the mighty Warners Bay Bulldogs, a fantastic achievement in what is still a relatively young Women’s competition in the BDAFL.

Kate was clearly destined for excellence, when she first pulled the footy boots on for a game of soccer at age 4. She would continue to play soccer throughout her childhood. Then, something that is probably no surprise to any of you, a rebellious teenager walked (slowly walked, as there is no need to break a sweat unnecessarily) away from sport, after dabbling in anything and everything from netball, oztag, tae kwon do, touch footy (which I am told is different from oztag) and basically any other sport you can think of. 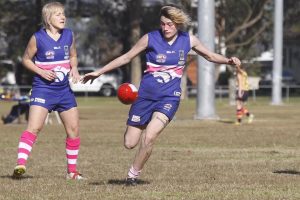 It was a moment of serendipity that bought Kate back to sport, with Emma Foreman pulling her along to a trial training session when Warners Bay were developing their women’s team. Boothy had some spare time, following her unceremonious decision to quit working full time pumping gas, to return to University to study Social Science, majoring in sociology and anthropology. AFL seemed like a great way to spend those spare weekends. Plus, she was keen to work out if anyone else in the world enjoyed VBs as much as she does, and thought that Warners Bay AFC was a good place to start this research.

As with most players who joined our team, Boothy wouldn’t have been classified as an AFL fan, having never played or watched a game prior, but the beauty and skill associated with playing has made Boothy walk away from her previous NRL focuses (Manly & NSW) who are both experiencing a performance slump. Essentially, Boothy will only support you when you are winning!

If you asked Boothy to name her two greatest achievements in the past 4 seasons apart from getting to spend so much time with her wonderful teammates (wink wink), I think the two would be representing the BDAFL for two years in some hard fought games against women who are at the top flight of the game, and also convincing a fellow player to bite through a schooner glass (please don’t ask for specifics).

As a fellow teammate, having Boothy around is always a laugh, and not just because she can’t run and kick a ball without sticking her tongue out, but because she puts her all in, in all situations and is a truly wonderful human being.

We all congratulate Boothy on this fantastic achievement and wish her well in what is shaping up as a promising season for the Doggies.