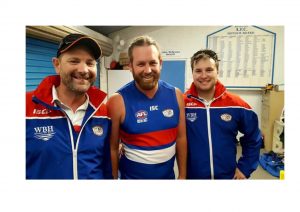 Murray “Muzz” Younger was never the most athletic child. His parents begged him to start playing sport so he decided to take up one where there was minimal effort and thinking, so he started rugby League. As Muzz grew older he decided he needed a challenge and ventured down to The Warners Bay Football Club. Muzz is now a key personality of the Reserves team and even managed to get a game and a goal playing Premier grade this year. We interviewed Muzz in the lead up to his 50th game and these are some of the responses we received:

I’ve been alive 28 years but my mental age is a lot lower than that.

Q2. What Is Your Occupation?

I picked AFL because it is less physical and I was getting more exercise, it was also a bonus that the club has a lot of great blokes to have a laugh and run around with.

Michael Vo, that guy is an absolute pest.

Easily Trent Stewart, not a boring moment with him.

My most embarrassing moment was when a kid weighing no more than 65kg got in a wrestle with me and got me to the ground. There was also another time that I had bad cramps after the game and a few of the boys caught me sitting down to pee.

Trent Stewart again, that guys is an absolute legend and great guy to have a beer with.

Q10. What do you think of the Ressies’ season so far?

I owe a lot of the team’s success mainly to my skills but also the reuniting of the Big 3 including Voey, Clarkey and myself. Without those boys I wouldn’t be half to player or personality I am within the team.

In Murray’s spare time we is often found playing fortnite and heckling his teammates both in person and through social media. He is also known for requesting we do extra running and drills at training always coinciding with him coming down with cramps and not completing the drills. However, Murray’s speed and silky skills are something all us ressies aspire too in our fledgling careers.

Congrats Murray and all the best!