This week’s player profile will focus on long-standing Bulldog, Leesa Wholohan. The 2018 season marks Leesa’s third at the club and will likely will not be her last.

Leesa was born and bred in the East End of Newcastle City, starting her sporting journey when she was 7 years old on the netball court. In typical full-of-energy Wholohan style, she played Centre for near 10 years before breaking her arm in a skateboarding accident bringing her sporting activities to a halt for some time. 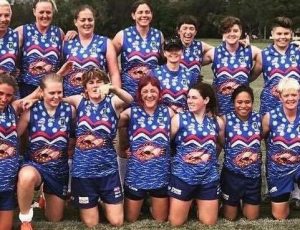 Lees made her return to team sports in 2016 when she decided to give Aussie Rules a crack and pulled on the number 11 jersey for the Warners Bay Bulldogs. Although Lees has decided to go dry for 2018, she has always been heavily involved in the social side of the club, putting her fair share back into our wonderful Major Sponsor, the Warners Bay Hotel. On the field, Leesa is a solid half-forward flank with consistent fight.

Although she might drive the coach mad with her inability to stop talking and laughing, she often makes up for it taking solid marks and gaining possession out of contested situations. Leesa is a great sport, even stating that she “feels happy” when the other team scores. Although most would argue that this is strange, there is no changing Leesa’s unorthodox approach to the game of footy.

During the previous scratch match against Wallsend-West Newcastle, Leesa even pulled on a Swans jersey to give a hand and in doing so, managed to kick coach and gun goal-scorer Tracey Baker in the face. Assuming Baker lets her take the field again this weekend, Lees will undoubtedly make a mark against Wyong for Round 5 at the Doggies home ground. 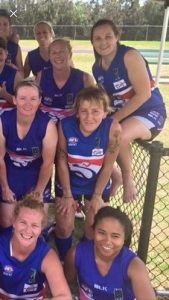 Although Lees isn’t big on watching sports, she enjoys watching the AFLW and taking the skills on board and applying it to her game. No doubt, Leesa doesn’t have a team and she would probably hope that they could all be winners.

All in all, Wholohan is a consistent player on the field and committed to training with the club. She has definitely had a positive impact on the women’s team and will continue to do so into the future. We wish her all the best for the rest of the season at the Bulldogs.