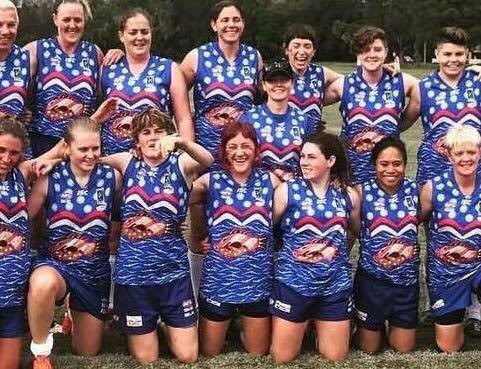 If you looked in the dictionary (for our younger players – that’s a book version of google but clearly not as fast) and looked up contributor, no doubt there would be a small picture of Emma Chester to represent. No task is too much and she is always the first one to put her hand up to help the club out.

Warner’s Bay women’s team got lucky a couple of years ago when Chester decided it was too much to continue to play for Nelson Bay Marlins and joined the Doggies. Wanting to spend a little less time with the year 11 & 12 girls who were both students at Tomaree High, where Chester is a PE teacher, and teammates, Chester migrated south for the winter and has since been a stalwart of the team. Ever reliable and able to play anywhere on the field, Chester is always there with a positive word of encouragement and a roll of strapping tape.

Being a PE teacher has its advantages, and as well as having played just about every single sport known to man, Chester is a wealth of knowledge when it comes to new drills at training.
In a season which has unfortunately been plagued by niggling injuries, Chester has worn her heart on her sleeve and put 100% into every game.

The quiet achiever who doesn’t boost of her achievements, Chester quietly played her 50th game in the BDAFL a few weeks ago, on the same day that she also celebrated her birthday. She is also deep in the preparations for the AFL Masters Carnival in October.

As the Doggies move into the final round ‘do or die’ game against Maitland, the club wishes Chester the absolute best in the game, even if we have had to wrap her in cotton wool to ensure she is there and able to play, and also thank her for her contribution to the Warner’s Bay AFL club.