The first round of the Black Diamond AFL kicked off last weekend with all three grades at home to the Killarney Vale Bombers. It was a day of mixed results for the Bulldogs, with Reserves and the Women’s side just going down in tight battles, whilst Premier Grade had a dominant 10 goal win.

The Reserve Grade boys kicked things off at 10am in warm conditions. The match was an even, hard fought contest for 3 and a half quarters before the opposition ran away with the game. The boys trailed early in the first quarter but managed to bring it to 18 all at the first break. The second quarter was much the same as the first, with the boys trailing the whole quarter, however, a Riley Williams pack mark and goal just before half time saw scores locked up again at 30 all at the main break.

The boys were looking good getting plenty of numbers to the ball, running the ball out of defence and transitioning down the ground into our forward line. Unfortunately this run dropped off after half time and after trailing by 2 goals at the final break we eventually went down by 33 points. Although the boys dropped off a bit at the end of the game, it was still a pretty good performance by considering we had 9 new players to the club. Paz, Nick, Ethan, Trev and Lachy all stood out in their first game for the club and were supported well by the ever reliable Tom Hoffman, Moiney (who kicked a ripper goal from outside 50) and Cooper (playing his first senior game for the club). Rob Barlow battled all day in the ruck, with Watty and Ando, our crafty veterans up forward, managing to pick up 2 goals apiece. All in all, a pleasing start to the season. We look forward to making the trip up to Singleton trying for our first win and stringing some good performances together. 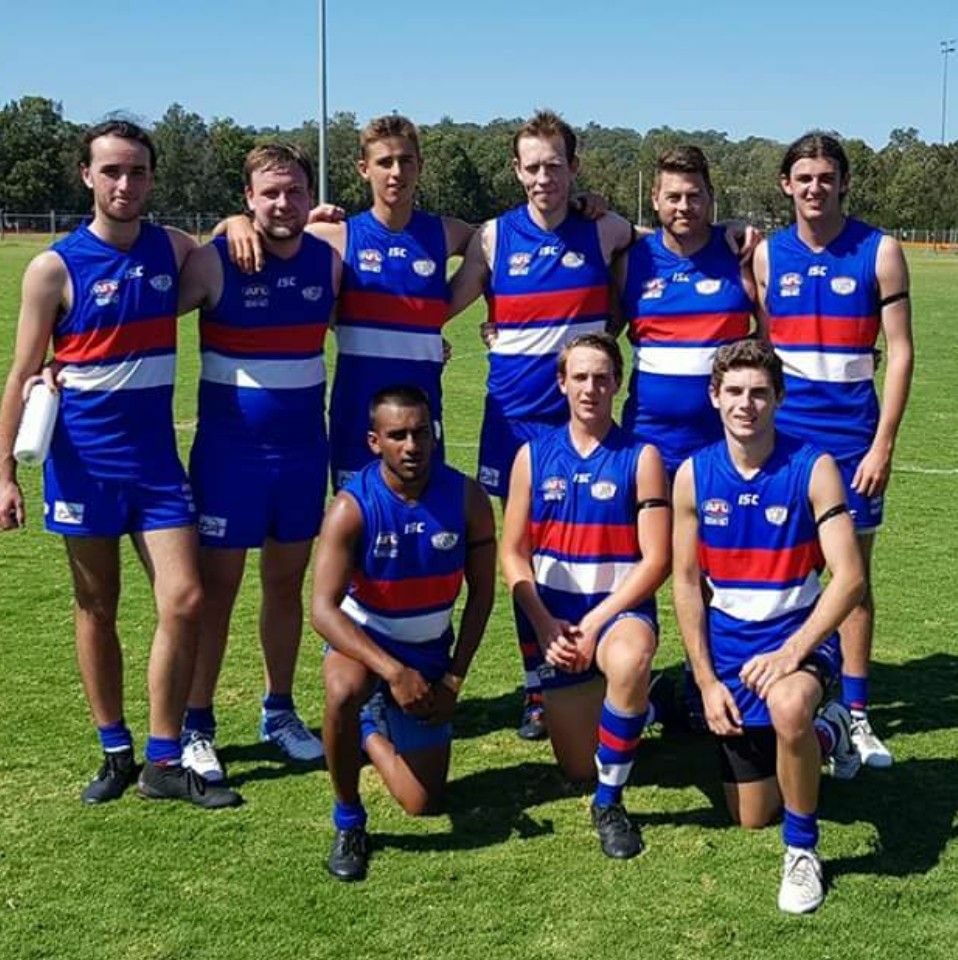 For the Women’s team, the opening round bought fierce competition despite the heat. The Bulldogs were off to a good start with strong forward Rachel Evans locking in the first goal. Coach Tracey Baker made an immediate impact with her return from injury, by securing another two goals after magnificent plays through the midfield. The Bombers however managed to kick two goals before quarter time to cut back our lead. In the second quarter, the lead was lost, with Killarney Vale opening with three goals. Whilst Baker locked in another goal for the Bulldogs, it wasn’t enough to hold the lead into the second half. With the Doggies down 33-35 at half time, it wasn’t long before the Bombers stretched their lead with another two goals. Amy Pittman, a standout in the midfield, tightened the gap with her first goal for the Bulldogs, bringing the total score to 6.5-41 to 7.8-50.

Whilst the Bulldogs weren’t able to walk away with the win in Round 1, the game remained competitive until the final minutes, leaving Baker optimistic for the rest of the season. The effort and skill displayed within the ten debut bulldogs women, combined with that of the previous players shows promise for the Warners Bay women in 2018. With consistently strong effort from all on the field, the standouts for the opening round were Pittman, ruckman Di Crep, Kristy Jedrzejak, Chelsea Scott in the forward line and the constant back Hannah Gow. Congratulations to all our first gamers in Melanie, Sam, Madeline, Kirsty, Katie, Jessica, Amy, Brittany, Chelsie and Alicia. 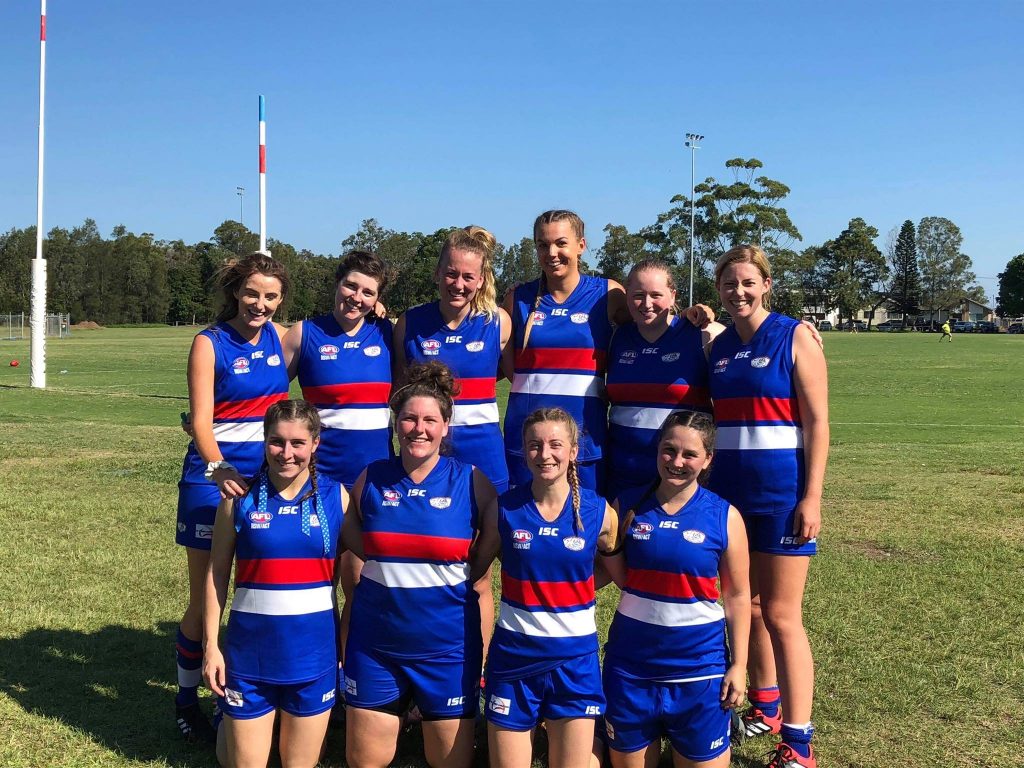 In Premier Grade, it was a different story with the Bulldogs dominating from the first bounce. The dogs were hard at the ball and laid some big tackles early with good numbers around the contest. The dogs were able to get an early lead with scores at 4.1-25 to 1.2-8 at the first break. The second quarter was similar to the first, with the dogs really starting to put the foot down and not allowing the Bombers to kick a goal. All 22 across the park were solid, however the returning Jack Hardman was dominant and proving to be a handful for the opposition in the mid field and up forward. Hardman was strongly supported by Leo Vo, Ben Hunter and the new Luke Needham. At the main break scores were 9.5-59 to 1.3-9. The final half was again dominated by the Bulldogs with the mids, backs and forwards all proving to be too strong for Killarney Vale with the Dogs coming away with a 10 goal win. Riley Warner was a special standout with the 17 year old dominating across the half back providing plenty of speed out of the back line. The ever reliable Linc Stewart was also fantastic across the back line. The victory was particularly pleasing for Coach Marty Reiman given the number of players who were unavailable. Captain and former club best and fairest winner Jake Roach was sidelined with an injury along with his younger brother Luke, whilst Ryan Sorenson was away. Congratulations to first gamers Dillon, Riley and Luke. The Victory in Premier Grade saw the Bulldogs win the McKeown / Granland Trophy. Leo Vo was given the Luke Rankin Medal as best on ground. 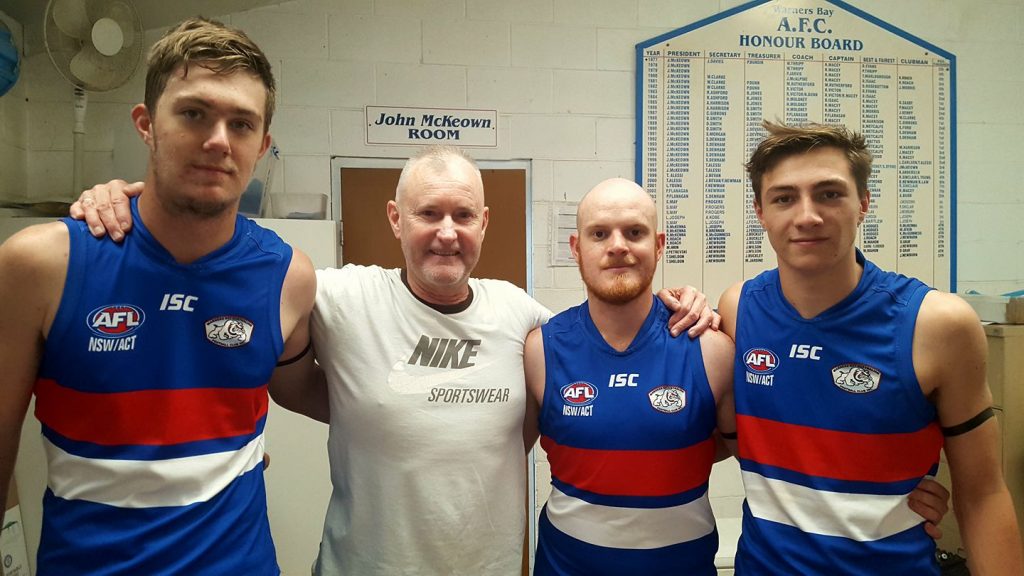 The day also saw a large crowd of past players, supporters and officials gather for a memorial service to honour the Late Kevin Roach Senior and to launch the inaugural Old Dogs Supporters Club. The Warners Bay Football Club would like to thank the volunteers, supporters, umpires and players for putting on a fantastic day.

Next Week, all three grades make the trip up the Hunter Valley to take on Singleton.

Scores around the Ground